With the transition to distance learning, we have made some changes to our network configuration. Students will no longer need an active VPN connection to access services such as Gitlab, YouTrack and key software licensing when operating remotely. For students unable to run essential software packages, remote desktop access (RDP) will be provided and assigned as needed. Please monitor your email and the Coronavirus section of the website for more details.

After a couple of years of inactivity, our Programming Team is recreating itself! On March 30th, they competed in a competition at Dickinson College. Two teams competed:

This is a great start for a team that is essentially brand new! I look forward to seeing their progress as they continue to compete.

The results are posted at: http://users.dickinson.edu/~braught/ProgrammingContest/sp19contest.html

The problem set can be found at: https://www.dropbox.com/s/v24ldm0x0g8ibww/Problems.zip?dl=0

Turn to the Duck Side

This semester’s swag is motivated by Rubber Duck Debugging: rubber ducks tagged for our software engineering program. They have been a great way to talk about how describing a problem out loud helps you understand it in ways that thinking alone never does.

To learn more about Rubber Duck Debugging, check out
https://rubberduckdebugging.com/ – a great example of a description of a valuable technique told with appropriate, nerdy humor!

Our students have taken to their ducks pretty quickly! They have named them and some carry them around. We have also put some in the classrooms for general use as shared pets!

Too Many Games and MAGFest 2017

Over the past year the Video Game Development Club has gotten the chance to present as an Indie developer at both Too Many Games 2016 and MAGFest 2017. At Too Many Games 2016, they showed off: Light Fight (Evan Schoenberger), Spectrum Shooter (Zach Thompson), Click Game (Nathaniel Manning), and a Platformer (Trevor Kelly). 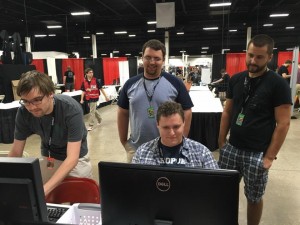 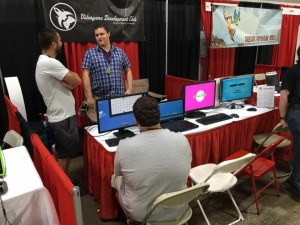 (From Left to Right: Zach, Nathaniel, Evan, and Trevor)

During the 3 day event Dr. Girard also threw together a simple game while preparing for a course. Students also got to meet with alumni and get interviewed while at Too Many Games. 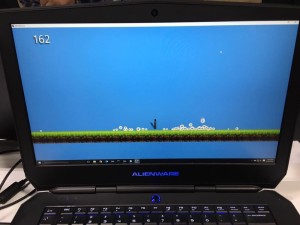 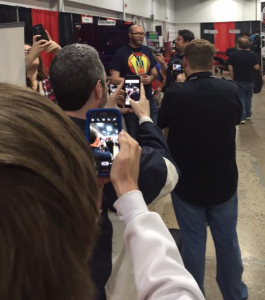 For MAGFest 2017 the club had to submit for approval any games to be shown for approval by the MIVS committee. Based on the feedback from Too Many Games the club decided to submit Spectrum Shooter. Zach Thompson, with the help of Chris Boyer and Abe Loscher set about rebuilding the game to improve stability and add in such things as sound and music.

To get the game accepted they created a short video to show off the game, see MagFest Entry, and after that made it through the first iteration, a demo that could be played for at least 15 minutes. Once accepted the group planned out the look of the booth and we were all set. In keeping with the theme of Spectrum Shooter being a game where you change the color of the shots the club went with mulit-colored Christmas lights to finish off the look of the booth. 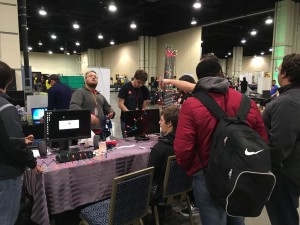 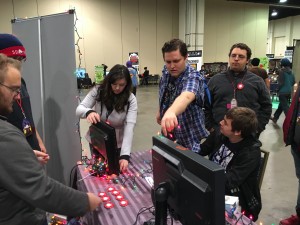 A total of 10 people went down to MAGFest 2017, three of which were the core development team for Spectrum Shooter: Zach Thompson, Abe Loscher, and Chris Boyer. 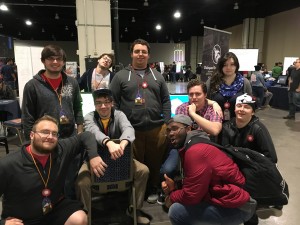 From Left to Right (Front): Chris Boyer, Zach Thompson, Emmanuel Douge, and Ben Weist
From Left to Right (Back): Luke Frankenfield, Abe Loscher, Nathaniel Manning, Evan Schoenberger, and Liz Ostrow. Not Pictured: Dr. Girard
The club is already planning for Too Many Games 2017 and what game(s) they will try and submit for MAGFest 2018 (Light Fight is one already being planned).

The students in the Engineering Deck (our living learning community) took some time off to shoot at each other!  Laser tag was a big hit.  Perhaps we need to expand this next semester. 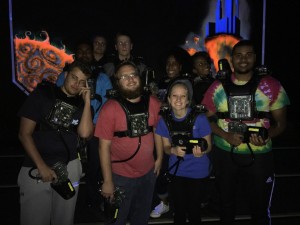 Check out the video of our Game Development Club’s submission to MagFest!  Thanks to Zach Thompson, Abe Loscher, and Chris Boyer!!!  Hope it gets accepted!

Both our Software Engineering and Computer Engineering programs have received ABET accreditation!!!  Check out why this matters.

News from the Engineering Lab

RIGOL Technologies recently launched a new education initiative, featuring the o-scope manuals that were developed here at Shippensburg.  “Dr Tom Briggs from Shippensburg University has created two Labratory Guides using the RIGOL DS1000Z and our demonstration board to teach Oscilloscope skills.   We are thankful for his partnership and excited to be able to offer this curriculum to our DS1Z customers.” – Mike Rizzo, general manager for RIGOL USA.  They also featured a quote from Dr. Briggs in a press release on the Evaluation Engineering blog.